3 Ways Playing in Puddles Could be Deadly to Your Dog

There’s a lot to be said for a vigorous walk with your dog after a heavy rainstorm. The landscape appears refreshed, the air smells great, and you and your dog get to unleash some cabin fever!

As fun as it is to watch your dog splash and play in the puddles you encounter on your walk, some caution is advised. Depending on the surrounding environment, those pools of standing water can harbor some health hazards. 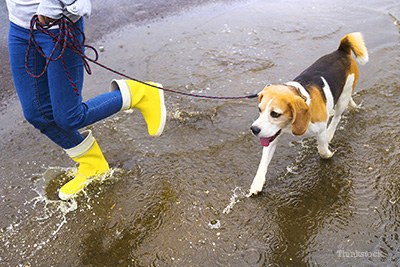 Dogs can contract leptospirosis by drinking from water sources contaminated with urine from an infected animal. Puddles that have formed from rain runoff certainly qualify as such a source. A 2002 study on the prevalence of canine leptospirosis in the United States and Canada revealed that disease prevalence correlates with the amount of rainfall. The more rain, the more dogs diagnosed with leptospirosis1.

Not all dogs become sick when exposed to Leptospirosism, but for those that do, the results can be devastating. Leptospirosis most commonly causes kidney failure. Associated symptoms include lethargy, vomiting, diarrhea, and loss of appetite. The liver and lungs are also targets for this disease. The diagnosis of leptospirosis is made via blood and urine testing. Successful treatment consists of antibiotics and supportive therapy such as supplemental fluids.

The leptospirosis vaccination does a good job of protecting against this disease. Talk with your veterinarian about whether or not this vaccine makes sense given where you live and the nature of your dog’s extracurricular activities.

Click here to learn more about leptospirosis and your dog

Giardia from puddles
Giardia organisms are microscopic protozoa that live within the intestinal tracts of a variety of domesticated and wild animals. The infectious (contagious) forms are shed within the feces and readily contaminate water sources. This is one of the main reasons it is recommended that drinking hikers and backpackers drink only filtered water. A 2012 study documented that dogs who attend dog parks are more likely to test positive for giardia than those who do not attend dog parks2.

The most common symptom caused by giardiasis in dogs is diarrhea. Vomiting and loss of appetite may also occur. The diagnosis is made via stool sample testing. A handful of medications can be used to rid the intestinal tract of giardia. Metronidazole and fenbendazole are the two most commonly used.

Click here to learn more about giardia and your dog.

Antifreeze puddles
Consumption of only a very tiny amount of antifreeze can have devastating consequences for dogs. Ethylene glycol, the active ingredient in antifreeze, causes acute, often irreversible kidney failure. Symptoms include lethargy, vomiting, diarrhea, loss of appetite, weakness and ultimately coma and/or seizures. The diagnosis is made based on history, urine and blood testing. Unfortunately, even with aggressive therapy, many dogs suffering from antifreeze toxicity don’t survive.

Until relatively recently, antifreeze had a sweet taste rendering it all the more enticing to dogs and children. In 2012 antifreeze manufacturers were forced to add a bittering agent to their products. Even with the addition of a bitter taste, vigilance is required to prevent antifreeze toxicity. A small amount of antifreeze within a puddle may not be enough to deter a thirsty dog from drinking.

Antifreeze sources include open product containers and antifreeze leaks from the undercarriage of vehicles. When with your dog, be sure to avoid puddles that have formed in and around parking lots.

Take home message
My goal in telling you about the potential perils of puddles isn’t to convince you to confine your dogs indoors. Heck, my dogs hike with me daily, rain or shine. Rather, my objective is to increase your awareness so that you will be mindful about where your dog drinks when out and about with you (no parking lot puddles!). I encourage you to maintain awareness of the symptoms of leptospirosis, giardiasis and antifreeze toxicity so that, if observed, you will seek veterinary attention right away.