Ticks, Dogs and Winter Weather: The Danger is Still Here 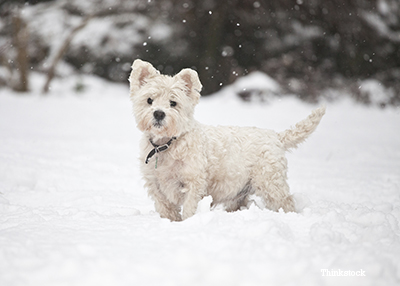 Did you know that ticks are not just a spring and summer problem? You might be surprised to learn that ticks can be found year round, and not just in warmer climates. A 2010 study from the Journal of Clinical Investigation showed that some infected ticks have actually developed a type of anti-freeze glycoprotein to survive the cold. Unfortunately, this means that just because winter has arrived, dog parents cannot let their guard down when it comes to ticks.

Why should winter ticks concern you?
Ticks are found throughout the United States and can spread diseases like Lyme disease, Ehrlichiosis, Rocky Mountain Spotted Fever, Anaplasmosis, Tularemia and Babesia. Lyme disease and other tick-borne illnesses are a significant source of morbidity in people and dogs — in particular, Lyme disease; the CDC says it has been reported in almost every state as of 2013, and its prevalence is increasing in the Northeast, Southeast, and Midwest according to a Parasites & Vectors report found here. Check with your veterinarian about the risk of Lyme disease in your area and click here to view the CAPC prevalence maps for Lyme and other tick-borne diseases.

Diagnosis of tick-borne disease
Since many affected animals may not show signs of disease, or may take months to develop symptoms, screening tests are a vital component of a dog’s annual exam. These tests screen for the most common tick-borne illnesses, such as Lyme disease, Ehrlichiosis, and Anaplasmosis.

How to protect your dogs from winter ticks
Speak with your veterinarian to find out if ticks are a year round problem in your area and if she recommends your pet be vaccinated for Lyme disease.

Consider these three tips to help protect your dogs from tick borne illnesses:

While spring and summer are the most dangerous times when it comes to ticks, it’s important to remember that these creepy critters can be found year round depending on the weather in your area. By keeping your dogs on tick preventatives, screening for tick-borne illnesses yearly, and checking for ticks, you are doing everything you can to keep your dogs safe from ticks.