Salmonella and Your Dog 101 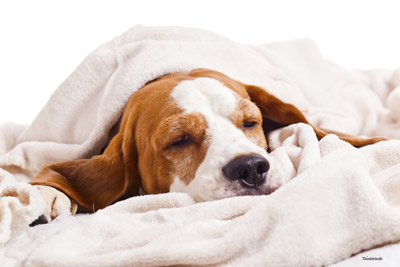 Salmonella is a wide-spread and very significant bacterial organism that affects many species of animals, including humans. It affects warm blooded as well as cold blooded animals. A member of the bacterial family, Enterobacteriaceae Salmonella is spread either directly or indirectly by fecal-oral contamination among individuals, and between species by means of ingestion of the organism in food or water or by contact with contaminated objects called fomites.1

Salmonella is a zoonotic bacteria that infects animals and people and can be spread from one specie to another. Reptiles, such as turtles, lizards, and snakes, are particularly likely to harbor Salmonella in their gastrointestinal tract, but warm-blooded pets and livestock can also carry the bacteria and appear perfectly healthy, according to the Centers for Disease Control and Prevention. Clinical signs are uncommon in dogs, but canine salmonellosis is often associated with concurrent diseases in older dogs or with large numbers of infectious organisms in puppies.

Do dogs spread Salmonella?
Some pet products, like pet foods and treats, can be contaminated with Salmonella and other germs, says the CDC. So we know that dogs, just like humans are infected by ingestion. Somewhat surprisingly, Salmonellosis is seen infrequently in dogs and cats and is generally limited to signs of acute diarrhea.1

How common is Salmonella in dogs?
While some early surveys disclosed that over 20% of the dogs in a population may have been infected.2  Food Safety News reports that more recent studies indicate that figure may be closer to 3%.

The role of food in Salmonella infections
Food safety news also reports that, according to the FDA, when contaminated with harmful bacteria such as Salmonella, pet foods and treats can make pets sick. These bacteria can also spread from animals to guardians, and people can be sickened simply from handling contaminated pet food.

What happens once a dog is infected by Salmonella?
Salmonella is a common bacteria, but doesn’t often cause disease in healthy dogs. In order for Salmonella to cause disease, a large number of organisms are thought to be necessary to overcome stomach acidity and to become established among normal intestinal bacteria.3

Diagnosis of Salmonella in dogs
In addition to clinical signs a number of tests might be suggested by your veterinarian. Fecal culture, RealPCR ™testing, or cultures of other bodily fluids may be of confirmatory value.

Clinical signs of Salmonella in dogs
Again carrier states with no clinical signs are common, but when clinical signs do occur they are most commonly associated with diarrhea.  The severe form of the disease may cause diarrhea, vomiting, fever, depression, abortion, and death. According to the CDC, “Dogs and cats that become ill from Salmonella infection generally will have diarrhea that may contain blood or mucus. Affected animals may seem more tired than usual, and may have a fever or vomit.”

It is always important to be familiar with your dog’s baseline health. By knowing that, you can sometimes be aware of even the most subtle changes, before they become too serious.

Treatment of Salmonella in dogs
If your dog shows any signs of gastrointestinal disease or is showing any of the symptoms above, and particularly if your dog has been eating raw diets or any of the products that have been recalled because of contamination, see your veterinarian at once.

Though many cases will resolve on their own, treatment of Salmonella infections with antibiotics may be necessary for severe cases and hospitalization in a veterinary facility where fluids and medications can be administered.

Prevention of infection
There is no vaccine available for prevention of Salmonella. The key to prevention is exercising control over what your dog eats. Discourage your dog from eating stool, hunting, or drinking water that may be contaminated with feces. Ask your veterinarian for a recommendation of a safe diet for your dog. Always wash your hands thoroughly after handling raw foods, commercial pet diets, or handling any pets or stool.