Transitional cell carcinoma (TCC) is the most common cancerous condition affecting the urinary tract of dogs. Scottish Terriers top the list in terms of breed predisposition. 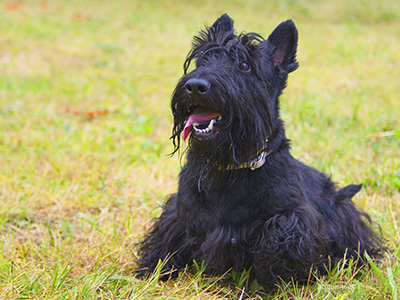 What is TCC?
TCC is a malignant tumor that most commonly grows within the urinary bladder. It also frequents the urethra, the tube-like structure that drains urine from the bladder to the outside world. TCC can also arise within the prostate gland (males), kidneys, or ureters (the long, narrow tubes that transport urine from the kidneys into the bladder).

This cancerous growth has a propensity for growing within the trigone region of the bladder, the anatomical area where urinary tract plumbing is most complicated. It is here that the urethra and ureters connect into the bladder. It’s no wonder that TCC commonly causes a dog to experience difficulty urinating and, sometimes, even complete urinary tract obstruction.

What causes TCC?
TCC arises from transitional epithelial cells that line the inner surface of the urinary tract. In addition to growing inward within the lumen of the bladder and/or urethra, the cancer cells invade locally into the walls of these structures. TCC cells also have the ability to metastasize (spread) to lymph nodes and other distant organs.

What are the risk factors of TCC?
Genetic predisposition and environmental factors likely play a role in most cases of TCC. The genetic basis is strongly suspected because Scottish Terriers have as much as an 18-20 fold higher risk of this disease, reports Purdue.edu. Other predisposed breeds include, Shetland Sheepdogs, Beagles, West Highland White Terriers, and Wire Hair Fox Terriers.

Environmental factors that have been incriminated as risk factors for TCC include exposure to older generation pesticides and lawn herbicides. A study comparing 83 Scottish Terriers with TCC and 83 similarly aged, normal Scotties discovered that the group with cancer had greater exposure to lawns and gardens treated with insecticides and herbicides or herbicides alone. The effect of lawn and garden chemicals on other breeds has not yet been studied1.

Smoking is the number one cause of TCC in people, according to cancernetwork.com. It is not known if exposure to second hand smoke contributes to the occurrence of TCC in dogs.

Symptoms of TCC
The earliest symptoms caused by TCC vary from mild to severe, and often resemble those caused by a urinary tract infection. Such symptoms include:

Straining to have a bowel movement may be observed if the prostate gland becomes enlarged due to infiltration with TCC cells. When a dog becomes completely unable to urinate due to obstruction, systemic symptoms such as lethargy, vomiting, and loss of appetite will arise within 24 hours.

Diagnosis of TCC
TCC is suspected when a mass within the bladder is detected by an imaging study such as abdominal ultrasound. Growth of TCC within the urethra is best detected via endoscopy (a fiberoptic telescope device that allows visualization within the urinary tract).

Collection of tissue samples from the mass that are then processed and examined under the microscope is the only way to make a definitive diagnosis of TCC. Such tissue samples can be collected via surgery or endoscopy, and sometimes by urinary tract catheterization.

Other TCC testing
Many dogs with TCC have a concurrent urinary tract infection, and a urine culture is performed to determine if antibiotic therapy is warranted.

Once TCC has been diagnosed, “staging tests” may be performed. Staging is the process used to determine if the tumor has spread to other sites in the body. Staging is warranted when the additional information these tests provide are important for providing ongoing care. The results of staging tests assist in:

Staging tests for dogs with TCC may include:

Surgical treatment options for TCC
There are several options for treating TCC in dogs. Complete remission (complete elimination) of this cancer is always desirable, but this outcome tends to be the exception rather than the rule. Partial remission (reduction in the overall size of the tumor) and simply arresting growth of the tumor over a prolonged period are far more likely outcomes that usually result in restoring and maintaining an excellent quality of life.

Surgery of TCC
For dogs with TCC that has not spread outside of the bladder, complete surgical removal of the mass is the ideal therapy. Unfortunately, even for a highly gifted surgeon, this outcome usually isn’t possible. This is because TCC has a predilection for growing within the trigone region (neck of the bladder) where aggressive surgery would disrupt the delicate urethral and ureteral plumbing located there. Surgical removal works well when the TCC growth is relatively small and is located well away from the trigone.

Medical therapy of TCC
The medical options described below tend to be extremely well tolerated by most dogs. These drugs may be used individually, but it is not unusual for them to be used in combination to treat dogs with TCC.

Piroxicam
Piroxicam is an oral non-steroidal anti-inflammatory medication that substantially reduces the size of many TCC tumors. Piroxicam and other nonsteroidal anti-inflammatory medications (e.g., Rimadyl, Deramaxx, Previcox) are referred to as cyclooxygenase (cox) inhibitors. It so happens that TCC cells often produce and use cyclooxygenase, and inhibition of this enzyme can hinder tumor growth.

Piroxicam’s ability to influence the growth of cancer cells was discovered accidentally when the drug was being used to provide pain relief for dogs with cancer. Unexpected cancer remissions were observed. This resulted in a study of 34 dogs with TCC who were treated with piroxicam2. The results were as follows:

Mitoxantrone
A chemotherapy drug called mitoxantrone has also been used to successfully treat TCC. A study of 48 dogs treated with the combination of piroxicam and mitaxantrone was performed by the Veterinary Cooperative Oncology Group. Results included:

Vinblastine
A third drug for the treatment of TCC is vinblastine. This drug is typically used following failure of the other drugs mentioned above. A study using vinblastine to treat 28 dogs with TCC resulted in3:

Metronomic therapy
Metronomic chemotherapy refers to long term, low dose, frequent oral administration of a chemotherapy drug. Metronomic therapy is given with hopes of blocking the formation of new blood vessels within the tumor, thereby inhibiting its growth. This is referred to as an “anti-angiogenic” effect.

A study of metronomic therapy for TCC was performed using a drug called chlorambucil (Leukeran). Of the 31 dogs studied, 29 had failed prior TCC treatment. The results are as follows4:

Questions to ask your veterinarian:

1. Robertson, John, VMD, PhD, and Elizabeth McStay, BS. "Common Health Problems, How to Recognize Them and What to Do  About Them." (n.d.): n. pag. Westie Foundation. Web. <http://www.westiefoundation.org/>.