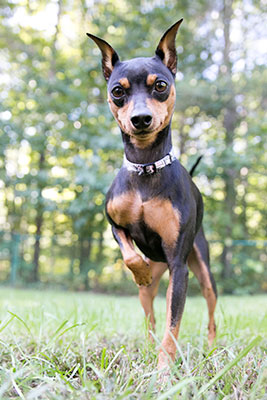 Legg-Perthes disease is a condition that affects the hip of the dog at the ball-in-socket joint where the femur (thigh bone) meets the pelvis. Also known as Legg-Calvé-Perthes disease, this disorder causes the femoral head (the ball of the hip joint) to spontaneously disintegrate, ultimately collapsing the joint and resulting in a very painful and dysfunctional condition.

Because of the pain involved, dogs may become irritable and “not themselves.” Progressive limping may occur, with a dog bearing no weight on the affected limb within roughly two months. Atrophy, or loss of muscle mass, is visible in the thigh.

Is your dog at risk for Legg-Perthes disease?
Legg-Perthes disease is found in puppies of miniature, toy, and small dog breeds such as small terriers (e.g. Yorkshire), Miniature Pinschers and Toy Poodles. There is also evidence of hereditary predisposition, so breeding of affected dogs is discouraged. Males and females alike can be affected, and most patients are 5-8 months old.

Other hip conditions can cause signs that can appear similar to Legg-Perthes disease, such as fractures, dislocations, or hip dysplasia. Another disorder that commonly affects small breed dogs is a dislocated knee cap (medial luxating patella or MPL).

Diagnosing Legg-Perthes disease
When examining a dog that is suspected to have Legg-Perthes disease, your veterinarian or surgeon will perform several orthopedic tests. Among these, extending the hind leg backwards will invariably make a dog with the disease react painfully.

Since other hip conditions can make a dog react the same way, the next step is to take hip X-rays. This is ideally done under sedation to get good quality pictures and avoid pain. Collapse and fracturing of the hip can be detected on X-rays.

Treating Legg-Perthes disease with surgery
Once the disease is confirmed, treatment can begin. Since the disease causes pain and loss of bone, conservative treatments such as rest and pain medications will not help long term. The treatment of choice is a surgical procedure called a Femoral Head Ostectomy (FHO). During an FHO, the ball (or head) and neck of the femur are removed. When both hips are affected, one surgery at a time is preferred, usually 2 months apart.

After surgery, the healing process begins. Scar tissue will build up in the space where the femoral head and neck were removed, creating a "false joint" or “fake joint.” The scar tissue also prevents rubbing of bone on bone. The FHO therefore eliminates the pain caused by Legg-Perthes disease.

The secret to a successful FHO surgery is appropriate physical therapy. After surgery, your veterinarian or surgeon will explain a regimen of activity restrictions and physical therapy that should be strictly adhered to. This is necessary to get your dog as mobile and functional as possible. If you have a hard time performing physical therapy yourself, then seek help from a rehabilitation specialist.

In good hands, few complications occur with FHO surgery, besides the normal risks with any surgery or anesthesia.

Overall, Legg-Perthes disease has a good to great outcome after surgery and physical therapy.

[History buffs will enjoy knowing that the name of the condition comes from the three human orthopedic surgeons who originally described it in children at the beginning of the 20th century: Arthur Legg in the US, Jacques Calvé in France and Georg Perthes in Germany]