The Border Collie with the Big, Bad Belly Lump 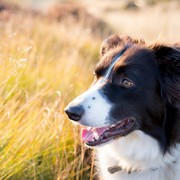 Jessie, a 9-year-old border collie mix, was evaluated by her family veterinarian for a large mass in her groin area. It was so large, that it had begun to hinder Jessie’s walking. The lump had appeared a few months earlier and grew fairly quickly. It was starting to look bumpy, and was oozing and hairless. The mass was also stretching the skin.

In this location, the skin can become traumatized by a mass in three different ways:

Could the mass be mammary cancer?
Jessie’s veterinarian was concerned that the mass could be cancer based on its appearance and quick growth. Given the location, it could very well be mammary (breast) cancer.

Jessie was scheduled for surgery the following week. I was called to perform the surgery at Jessie’s local practice. Before surgery, I had a long talk with Jessie’s guardian. She was well aware that the mass could be cancerous, and she was ready to do anything for her beloved dog. Fortunately, pre-surgical chest X-rays did not show any sign of the tumor spreading to her lungs, and laboratory tests did not reveal any organ dysfunction that would make anesthesia and surgery more risky.

The different layers of tissue were stitched up. Jessie recovered from anesthesia smoothly. She was sent home with an Elizabethan collar (plastic cone) to prevent her from licking or chewing the incision. She received antibiotics and pain medications for a week.

Why biopsy the mass?
The mass was sent to the lab for a biopsy. After about a week, the results came back. Amazingly, the mass was not malignant! It was a benign fatty tumor called a lipoma. Jessie’s guardian was thrilled and relieved that removal was likely curative. By then Jessie was walking and feeling great, enjoying her new life without a big mass interfering with her walking.

Test lumps on your dog before they grow
Jessie’s story shows that the only way to confirm what a mass is, is to test it. Most of the time this will mean that your veterinarian either collects a small needle sample for microscopic study (cytology), or tests the mass itself after removal (biopsy for histopathology).  For the sake of your dog, please don’t hesitate to have these tests run. If you’re worried about the expense, consider pet insurance now, and thank yourself later.

Just because a mass looks “ugly” and grows quickly, it doesn’t necessarily mean that the mass is cancer. The quicker you see your veterinarian, the quicker you will know for sure. Jessie’s guardian was relieved to hear the great news, and the surgery will greatly improve her border collie’s quality of life.