Miracle Marley: The Dog I Will Never Forget 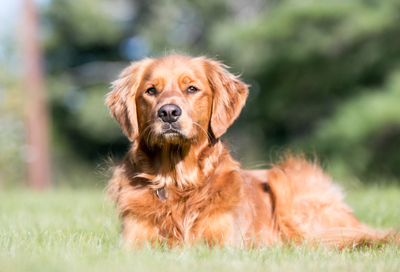 Do you believe in miracles?
This is the incredible story of Marley. A beautiful, 5-year-old, golden retriever. He was brought to the emergency clinic for a sudden onset of difficulty breathing.

What was wrong with Marley?
Marley’s chest X-rays showed a rare condition called spontaneous pneumothorax. A pneumothorax occurs when there is free air outside the lungs (air should only be inside the lungs). This leads to a lack of oxygen and suffocation. There are two types of pneumothorax:

Marley’s surgery
Marley's bulla was so large, that we could see it on X-rays. The fastest and most common treatment for a spontaneous pneumothorax is surgery. After a little bit of hesitation, Marley's guardians decided to have surgery done and give their beloved dog a fighting chance.

As soon as we opened Marley's chest, we saw a huge, ruptured bulla, about the size of a kiwi, in his left lung. We removed the diseased part, but there was another, smaller, intact bulla in the right lung, so we removed that part of the lung as well.

The next step is a simple but effective test. The chest cavity is filled with sterile saline to test for leaks or another ruptured bulla. It's similar to repairing a bicycle tire: you submerge the tire in a bucket of water and observe air bubbles coming up to the surface. As we were checking for bubbles, my nurses and I noticed that Marley suddenly had difficulty breathing. The anesthesia nurse noticed that his gums and tongue were purple, a sign of a severe lack in oxygen.

Marley’s bizarre turn
Everything had been going according to plan until that moment, and there was nothing that explained Marley’s turn. Theories emerged, but none of them made sense. The anesthesia nurse continued to assist Marley’s breathing. It had been several minutes already and his brain and vital organs had been deprived of oxygen.

After we removed the sterile saline from Marley’s chest, it became apparent that the entire right lung was completely collapsed. It was a terrifyingly gray, indicating that there was no oxygen in that lung at all. The anesthesia nurse continued to breathe for Marley.

There wasn’t much we could do but continue to assist Marley’s breathing and give him a bit more time. Seconds turned into minutes -- they felt like hours. There was not a sound in the OR, besides the reassuring beats of the heart on the anesthesia monitor. Ironically, we were all holding our breath! Was Marley going to make it?

Marley fights back
As we all began to fear for the worst, all of a sudden, a tiny area of the lung became pinkish. There was no logical explanation for this, but still it happened. Inch by inch, the right lung turned from gray to pinkish to pink. This was great, but we were concerned about how much Marley’s brain and vital organs might have been affected by the lack of oxygen.

We quickly proceeded to the next step of the surgery (pleurodesis). It’s a procedure to encourage the surface of the lung to stick to the rib cage and to eliminate any open space where air could accumulate, should Marley get another bulla.

The chest was then closed and Marley was transferred to ICU. He had started to breathe on his own, but to our despair, he didn't wake up. He also had no reaction to stimulation. Marley appeared to be in a coma. It was now time for me to give Marley’s family a very difficult phone call. What could I possibly say? "The surgery went great, we fixed the problem, we did nothing wrong, but your dog is brain dead?"

I explained the situation, and his guardians understood how grave it was. They said that they wanted to come to the clinic, visit with Marley and "make a decision".

The entire family showed up. A few at a time, they came to pet Marley and talk to him. It was a very emotional visit. There were tears, and not only in the eyes of Marley’s family members. His guardians asked me if they should put Marley to sleep. Because all of his vital signs were fine, and he was not in pain, I suggested keeping him in ICU overnight, under close supervision, and making a decision in the morning. His guardians agreed. It was a gamble, but we all thought we should give Marley one more chance.

Overnight, Marley remained the same for hours. Breathing steadily through a tube delivering oxygen, but essentially brain dead. In the middle of the night, he started to resist what the nurses were doing to him, (flipping him from one side to the other).

Later, he wouldn't tolerate the breathing tube in his wind pipe anymore. The tube was removed.

From there, Marley steadily improved! He became more aware of his surroundings. He started to regain enough strength to get up and take a walk. He even began to become interested in food.

It was a fascinating and amazing recovery. After a few days, Marley was able to go home. There, he continued to progress and slowly became “himself” again.

How did it happen?
Veterinary medicine is not an exact science. Sometimes, bizarre things happen that we just cannot explain logically. We got extremely lucky with Marley’s outcome. What started as a fairly straight forward surgery (albeit open chest surgery), suddenly turned into a disaster! Yet, what we ended up with is this amazingly happy story. I will always remember Marley – my miracle patient - his family, and their fighting spirit.