Behind the Scenes: The Rescue of Jax, the Kidnapped Puppy 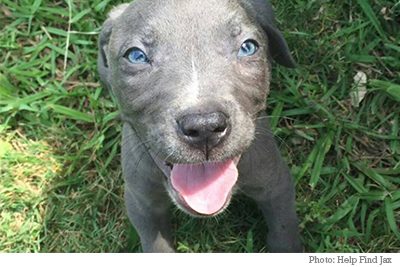 Last week we met Jax, the kidnapped puppy who was so determined to get home, he jumped out of a moving truck on the highway (read the full story here). I wanted to know more about Jax’s story so I reached out to Kathryn Smith, the HR Manager at the clinic that treated Jax (Allandale Veterinary Clinic) for an interview and found out how Jax’s visit impacted her. (Allandale is a client of Pet Health Network's parent company, IDEXX Laboratories.)

What happened Saturday morning at the clinic?
Kathryn: I am the HR Manager here at Allandale Veterinary Clinic and I was working that Saturday when Jax, the injured puppy, originally came in. Saturdays are a short day for us and we tend to only see routine appointments, so when the puppy came in, we jumped into action to make him a priority. We had no idea about head trauma and/or internal injuries, but obviously this was our worst fear.

Where was Jax to go?
Kathryn: It was brought to my attention that the good Samaritan that brought Jax into us could not take him home with him due to his other animals. After knowing that this puppy's pelvis was definitely broken (and we were still unsure about internal injuries and/or head trauma), I knew that he would not get the care he needed, such as a quiet place to rest and veterinary staff to attend to his medical issues at one of Austin's lost pet facilities (which is standard protocol when a stray pet is brought to us). So, I offered to take him home over the weekend. I scoured craigslist lost pets and searched through the reports at Austin Animal Center to see if anyone had lost their puppy.

How did Jax finally reunite with his family?
Kathryn: When I came back into work on Tuesday, the puppy came with me. I received a frantic phone call from a gentleman named Jordan. He said he was on his way over to come get his puppy. At this point we did not know that the puppy was stolen, and I was very apprehensive to just give this puppy over; the bill at the clinic was over $800 at this point.

Jordan informed me that he had, in fact, filed a police report. I called them to confirm the story and it was brought to light that this was in fact his puppy. Jordan also informed me of the "Help Find Jax" Facebook page, on which I was also able to confirm that it was, in fact, the same pet. Shortly afterward, Jordan arrived at the clinic and was reunited with his beloved puppy. The owners took him home on pain medication, antibiotics, and strict activity restriction. 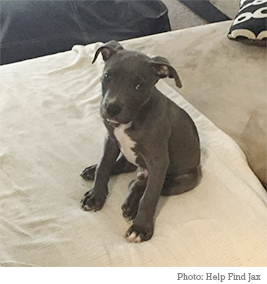 What's next for Jax?
Kathryn:  The surgeon reviewed the second set of radiographs and since Jax is still young and growing he recommends to re-evaluate the injury in approx. 6 months to determine the puppy's growth progress with the fracture, then at that point, determine what type of surgery he will need; most likely he will need a FHO (Femoral Head Osteotomy). We plan on seeing him back in a few months to evaluate his progress, but at this point it's a waiting game to see how he heals and exactly what kind of surgery he will need.

What lessons can be learned?
Kathryn:  You will find stories like this all over from rescue groups and shelters. So many animals go unnoticed. I am so glad Jax's case is getting the attention it deserves. One of the main points I would like brought up is the importance of having your pet microchipped. It's really hard to go off of pictures to determine ownership of a pet when there is really no identifying factor. We will continue to do our part for the animals while educating the clients about proper care, and of course always hope for the best!

Learn how microchipping can save a life >>