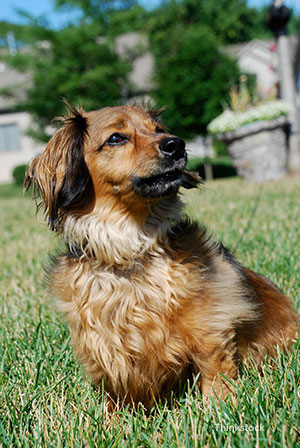 Ollie the Dachshund is a hero indeed. When a burglar broke into his family’s home on December 28th Ollie confronted the man. The experience must have been traumatic because right after the incident occurred, Ollie disappeared. Fortunately, the brave dog was happily reunited with his family on Sunday, January 12th, reported by the Inquisitr.

Evan Greathouse, Ollie’s pet parent wasn’t home at the time of the break in; it was just Ollie, Greathouse’s fiancé and Heinz, another Dachshund in the apartment located in Bucks County, Pennsylvania. When the two dogs saw the intruder they tackled him and eventually the burglar was shot twice  by a neighbor. That’s when Ollie took off.

Ollie had two animal rescue groups looking for him: Dachshund Rescue of Bucks County and Ruby the Lost Greyhound. As well as his family and concerned neighbors. The interesting part is that Ollie had only traveled about a mile from his house. Veterinarians explained that situations like this can be common for animals that have just been in a stressful situation. Simply, Ollie was scared.

On Saturday, January 11th Greathouse told the Inquisitr that a neighbor had a valid sighting on Saturday, “He’s in our backyard. He went into the woods there. We put out some food for him: liverwurst, some cheeseburger meat, basically stinky dog food.” They also setup a motion detection camera aimed at the food which was how one of the groups was able to safely catch Ollie and return him home. Read the full story here.