New Study Supports a Special Bond between Dogs and Mothers 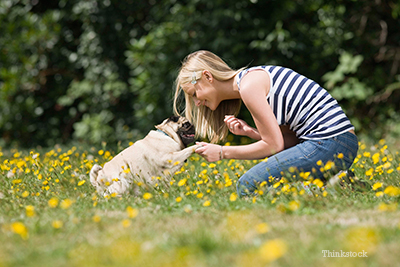 Is your dog your baby? In the past, the concept of having a maternal bond with dogs has been dismissed or even mocked, but now real science supports the idea. Rachel Feltman, of The Washington Post, reports on the study conducted by Massachusetts General Hospital researchers and published in PLOS ONE.

Participants in this study were shown photos of unfamiliar children, unfamiliar dogs, their own children and their own dogs all while an MRI scanner monitored their brain activity. Participants were also asked to take a brief test afterwards to confirm that they had been paying attention1.

Feltman reports that the study showed “a common network of brain regions involved in emotion, reward, affiliation, visual processing and social cognition” when mothers viewed images of their own children and dogs. “These brain networks may be important in forming and maintaining strong emotional bonds,” said the researchers.

Virginia Hughes of National Geographic also reported on the study, commenting “Of course, we don’t really need a fancy (and expensive) neurimaging experiment to demonstrate how much dogs mean to their people. Two-thirds of American households have pets, and we spend a whopping $58 billion a year to take care of them.”

I’m sure that very few mothers would be shocked by these results, and I wouldn’t be surprised to find that fathers have a similar reaction put under identical circumstances. Not just dogs, but all pets have an irrepressible tendency to become part of the family, and what wouldn’t you do for your family? What’s more, loving our pets probably isn’t a one way street. See Dr. Ruth’s thoughts about how cats love us back.

This story was selected for our series: “Heartwarming Stories for Your Holiday.”