New Technology Will Let You Play with your Dog or Cat Anywhere! 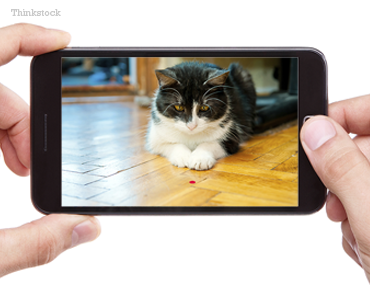 Petcube Inc., formed by three friends from the Ukraine, is poised to release a very exciting new product aimed specifically at pet parents and their pets. Petcube will help dog and cat lovers play with their pets even when they can’t be in the same room. As reported by forbes.com, “The product – a small aluminum and glass cube – is equipped with a camera, a speaker, wi-fi capability and a laser pointer that can be controlled remotely through the use of a smartphone or tablet app.” The camera and speaker will allow you to see and communicate with your pet from your smartphone, while the laser will allow you to play together.

“I saw the passion in the team,” said Semyon Dukach during an interview about his role in the project. Dukach became an investor after he met with Petcube Inc. CEO Yoroslav Azhnyuk. “I don’t know I can’t describe it—sometimes you just look at a guy and you know they’re going to succeed.”

The idea for Petcube is credited to Alex Neskin. He built the first prototype in his native Kyev, Ukraine when neighbors threatened to call the police over the amount of noise that his dog, Rocky, made when Neskin was out. According to Azhnyuk, the box worked so effectively that all of Neskin’s friends wanted to have one.

The company, which laid groundwork in May of 2013, has moved to San Francisco but maintains an office in Kyev. According to Forbes, they have received funding for Petcube from Semyon Dukach, SOS ventures, Haxlr8r, and a wildly successful Kickstarter campaign that brought in $251,000 over 42 days.

The Petcube will have a price tag of $199; undoubtedly, many pet parents will consider this cost to be minor compared to the issue of pet boredom. Pet boredom not only makes many owners feel guilty about being away but can easily turn into behavioral problems. Cult of Mac reports that Petcube has already been named one of 6 finalists in the SF New Tech and Macworld’s 6 About to Break contest.

The only downside may be that it’s too much fun. Do you think you’ll get any work done at the office with that adorable face looking back through your smartphone? Tell us below.