On December 4th, a little girl was lost in freezing temperatures, reported Life With Dogs and The Siberian Times. Liza Grabovskaya of Siberia, was walking home from school when she mistakenly stepped into a snow-covered hole that was over 5 feet deep. After Liza’s parents weren’t able to find her, they called the police and began a search party which included the school’s staff and other parents.They searched in vain the first night in the below freezing temperatures. 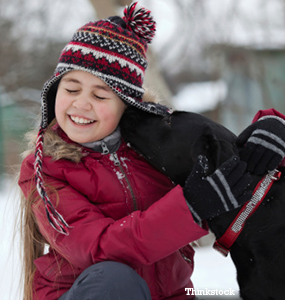 Officer Vasily Samarin joined the search the following morning. He told The Siberian Times, “There were several groups, I was the head of one group, there was a trained dog in our group [Rising Star Britney].” The group also included Rising Star Britney’s trainer, Oksana Khabarovsk, and Liza’s grandmother.

As reported by The Siberian Times, the search group retraced Liza’s steps by walking her usual route home. Rising Star Britney alertly sniffed out the child. Samarin explains, “The dog discovered a hole in the ground, a sort of well, where we found the child. A hot water pipe was there.”

Liza was taken to hospital  where Alexander Firsov, deputy head of the children’s hospital reported that Liza was physically going to be okay but would remain in the hospital for a few days while being treated for hypothermia.

It’s clear that Liza probably would not have survived had it not been for the efforts of Rising Star Britney. Police dogs are crucial under such circumstances. Much like their handlers these dogs are trained to serve, protect, and save lives.