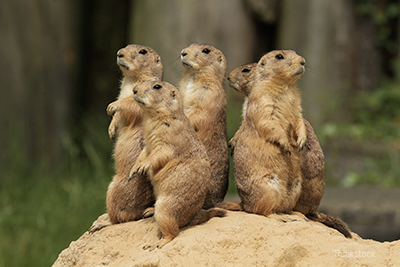 According to Brooks Hays of UPI.com, Arizona health officials became concerned when a large number of prairie dogs were found to be dying or dead. Several burrows were tested and were found to be infested with fleas that tested positive for Yersinia pestis. “Nearby burrows are now being cleared and disinfected, in an effort to stem any possible outbreak of the disease,” said UPI. The article went on to report that it’s actually not a new occurrence. “The plague isn't new to Arizona. The disease has been firmly established in the Grand Canyon State, as well as Colorado and New Mexico, for some time now. Every year, a handful of people are infected with the disease.” Still, with plague headlines in the news, you may well be wondering if your pet is at risk.

What causes the plague?
Yersnia pestis, the bacteria that causes plague, is commonly carried by small rodents such as ground squirrels, rats, mice and even rabbits. Unfortunately, small rodents and rabbits not only can carry Yersnia pestis, but can also become affected by it. Prairie dogs are very vulnerable to plague due to their social nature, and outbreaks can decimate the population.

This naturally occurring bacteria survives due to a cycle between rodents and fleas1. Plague is found in upland forests and grasslands in rural to semi-rural areas of the western part of the United States (especially the southwest regions)1. There is a higher incidence of plague during cooler summers that follow wet winters1, during the months of May to October. Wherever you expect rodents to live, that’s where this bacteria can survive. The more exposure to rodents or fleas, the higher the risk of exposure to Yersnia.

How can the plague spread to dogs and cats?
Rarely, dogs, cats and humans can be infected. The CDC says this may happen one of three ways:

So, is your dog or cat at risk from the plague?
Guardians should be especially cognizant of plague if they live in the Southwest, have indoor/outdoor pets that hunt, have pets with flea infestations, or live in an environment where their pets may be exposed to rodents. Keep in mind that outdoor cats are most at risk for being exposed to Yersnia, due to rodent hunting (another great reason to keep your cat indoors). Male cats may be at increased risk due to their roaming tendencies (and secondary exposure).

In dogs and cats, clinical signs of plague include:

Tips to keep you and your pets safe from the plague

While Yersnia is rare, pet guardians should know of this potentially life-threatening bacterial infection that can be spread to pets and people.