Dewey the Dachshund's Story: Paralysis Caused by a Slipped Disc 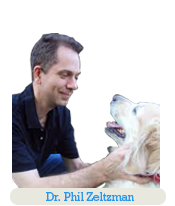 The day Dewy became paralyzed
Dewy, a 6 year old dachshund, was perfectly fine on Saturday morning. During the day, he ate his normal amount, played fetch, and went for several walks. Later in the evening, he seemed sore: walking hunched over like an old timer. Sunday morning, Dewy could not even stand. Dewy was paralyzed! His owner took him to the emergency clinic immediately.

Dewy's ER vet was concerned that he might have a slipped disc. This condition, called intervertebral disc disease or IVDD, is common in Doxies. In can happen in other dog breeds as well and rarely in cats.

Radiographs were performed to rule out other causes (such as a fracture or a tumor), even though they rarely show the slipped disc. Knowing exactly where the disc was would require “advanced imaging,” meaning an MRI, a cat scan or a special type of X-ray called a myelogram. MRI is often the preferred diagnostic tool, but that depends upon the imaging availability in your area and your surgeon’s preference.

After full blood work showed that Dewy was a good candidate for anesthesia, an MRI was performed. It showed a slipped disc in the lower back, in what is called the lumbar spine.

Dewy's owners elected to pursue surgery and were referred to a surgeon. He explained that there are two parts to the surgery: 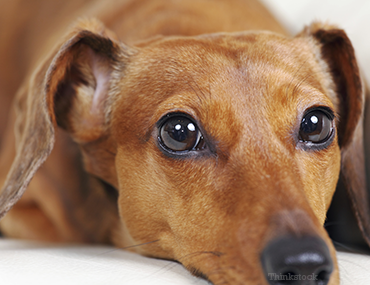 Surgery was a success.  A very large amount of disc material was removed, and the pressure on the spinal cord was relieved.

After surgery, Dewy needed intensive care. He required restricted activity and physical therapy. Patients require strict confinement, usually for two months after surgery. If the patient is paralyzed, physical therapy includes “bicycling” the legs. Once the dog can stand, we can progress to standing exercises and short walks. One of the best tools available is an underwater treadmill, which many veterinary physical therapists have.

Two weeks after surgery, it was time to removed Dewy’s stitches.  At this point, he was able to walk for a few minutes.

In the vast majority of cases, patients with a slipped disc can have a full recovery, even if they start out paralyzed.  If you have a Doxie, you must know about their higher risk of paralysis because of a slipped disc. One of the secrets for a successful outcome is how quickly surgery is performed after the incident.

A slipped disc is one of the few, true surgical emergencies, so time is of the essence.

Two months after surgery, Dewy was essentially back to normal, to his owner’s and his surgeon’s delight.