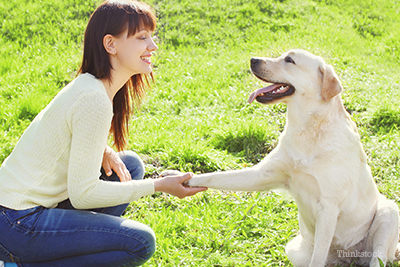 As a dog owner and a veterinarian, I can attest that my dog can recognize my face. Classic example? My dog, Milo, patiently sits on the sideline of my ultimate Frisbee games, while I play. As I start to walk off the field to sub out, I’ll watch him critically scan the field and then start to run toward the field to see if it’s me about to walk off. The only other time he starts to do this? When another Asian female is walking off the field. Milo will partially run out, recognize that it’s not me from 20 yards away, and walk back to the sideline.

But up to this point, veterinarians and pet owners have never had proof that dogs were capable of having “facial recognition function” that allows them to process human faces. Well, there’s finally scientific proof that dogs are as smart as we pet owners always thought they were!

New science shows dogs know faces
According to an article by Sarah Griffiths of Mail Online, recent scientific research from Emory University’s Department of Psychology, found that dogs are able to recognize human and dog faces.  Previously, this function has only been demonstrated in humans and primates. While we dog owners have always thought this to be true, this scientific evidence was difficult to find. With the help of a functional magnetic resonance imaging (fMRI) scanner, scientists at Emory University were able to identify a “face-selection” region in part of the brain – specifically the caudate nucleus in the brain. This study used an fMRI scanner to tests dogs’ response to a static and video image of faces on a screen while in the scanner.

Griffiths reports, these dogs had to be uniquely trained to stay motionless within the scanner – as traditionally, the use of MRI requires general anesthesia when used for veterinary purposes (that’s because it takes several minutes of scanning and the patient has to be perfectly motionless during the procedure). These dogs were also uniquely trained to respond to 2D images on screen, which was challenging as dogs don’t typically interact with 2D images (that’s why your dog doesn’t necessarily get excited when seeing a photo or a reflection in a mirror). Unfortunately, the sample size of this study was very small  – only 6 dogs were able to be trained adequately. Overall, this study found that dogs’ did respond to static images of faces while in the scanner. Neuroscientists dubbed the face-processing region the “dog face area” (DFA). This may explain some evolutionary questions of the relationship between man and his best friend, the dog. Dr. Gregory Berns, a neuroscientist at Emory University, believes that the temporal region of the brain has developed through cognitive evolution and allows dogs to pick up on subtle human social cues.

As a dog owner, what’s this study mean to you? It’s proof of what you already knew — your dog does recognize your mug and love you for it…

[Next, Learn if you can tell what your dog is feeling]