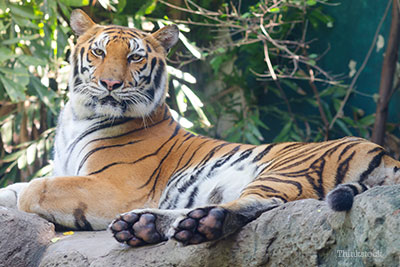 If you’ve shared your home with a dog over the past fifty years, chances are you’ve had your pooch vaccinated against “distemper.” Vaccination rates have been so good in the U.S. that I’ve only diagnosed a single case in 23 years of clinical practice. While canine distemper virus (CDV) may be extremely rare in our country, the virus is devastating to wild carnivores, especially tigers and lions, all over the world. Even worse, the virus is popping up in zoos and wildlife preserves threatening species already nearing extinction. What’s going on and how can we protect these precious wild species?

The French veterinarian Henri Carré first documented canine distemper in 19051. A vaccine against CDV was developed in 1923 and became commercially available in 1950. Old-timers like myself remember when canine distemper was referred to as “hard pad disease” due to the unmistakable overgrowth of skin on an infected dog’s feet or nose. While the name “Canine distemper” has persisted, we now know that other species may contract the virus. Ferrets, minks, skunks, badgers, otters, raccoons, red pandas, bears, Asian elephants, hyenas, seals, walruses, sea lions and large Felidae can contract and spread CDV2. Interestingly, while large cats such as tigers and lions are susceptible to CDV, domestic cats are immune. Because CDV can affect so many animals, many veterinary scientists are recommending we stop calling it “canine” distemper altogether.

So why are we suddenly seeing cases in these other animal species?

The spread of canine distemper virus
Most experts blame the spread of distemper to large carnivores largely on domestic dogs. In perhaps the largest documented outbreak to date, over 1,000 lions died in the Serengeti National Park in 1993-1994, nearly one-third of the park’s entire lion population3. Programs to increase CDV vaccination for dogs in an attempt to protect wild carnivores have been undertaken, with varying success. Unfortunately, the transmission of CDV is complex and there are probably animals other than domestic dogs now harboring and spreading CDV. In zoos, CDV can be inadvertently introduced by a wide variety of animal species that aren’t commonly associated with a “canine” disease. A new badger, otter, bear or elephant could silently spread a deadly disease to an unprotected big cat. In China, the highly prized, and protected, giant panda has experienced a CDV outbreak in a rescue center that has killed at least four pandas to date, according to theguardian.com.

What can be done to prevent canine distemper virus from threatening endangered species?
The first-ever "Vaccines for Conservation" international meeting was recently held at the Wildlife Conservation Society's (WCS) Bronx Zoo in New York City to determine how to protect wildlife from CDV. In addition to the WCS, scientists from Cornell University's College of Veterinary Medicine and the University of Glasgow's Institute of Biodiversity were in attendance.

They concluded that five basic steps need to be taken to protect wild carnivores from CDV and other infectious diseases:

If you’re interested in this issue, I encourage you to visit the Wildlife Conservation Society’s website at wcs.org.