Are You Ready for a World Without Elephants, Rhinos or Gorillas? 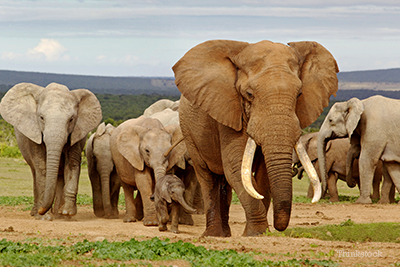 Imagine stepping outside one day and meeting a real-life woolly mammoth. Can you envision the feeling of amazement you would have as your head craned upward, fourteen feet1, to see the top of his head and your eyes traced the mighty splendor of his 16 foot tusks1? If you had a ladder handy, maybe you could even look into his kind, enormous eyes (I like to think they’d be kind). It would truly be an awe inspiring sight. Unfortunately, none of us will ever meet a wooly mammoth outside of a museum, and so all we can do is speculate on the experience. Well, according to a recently released study, future generations may also be “only speculating” about what it would be like to meet a real life elephant, rhino or gorilla.

Trouble ahead for large herbivores
Lindsay Abrams reports on salon.com that 60 percent of the earth’s largest herbivores have been driven to the brink of extinction. The alarming report that serves as the basis for Abrams’ article was authored by 16 researchers and is available on the website, Science Advances. The study looked at, “74 large, terrestrial herbivores — from bison to rhinos to hippopotamuses,” says Abrams. “About 60 percent are on the fast-track to extinction.”

The researchers concluded that the main threat to these animals was, “Extensive overhunting for meat across much of the developing world.” Other threats included2:

They added that, “Between 1970 and 2005, large mammal populations in Africa’s protected areas decreased by about 59%.” The data probably comes as little surprise to organizations like the World Wildlife Fund. Their website tells a depressing truth that during the 1980s, about 100,000 elephants were killed each year and, due to a growing demand for ivory, populations of elephants that had been recovering are now again at risk.

How would losing large herbivores affect you and the ecosystem?
Now, perhaps you’re thinking that the loss of large herbivores, while sad, would have little effect on your daily life and the overall ecosystem. This report indicates that you may want to think again.

While it’s true that most of us don’t interact with large herbivores on a regular basis, researchers suspect a cascading effect that would follow the loss of these animals. In one example, Abrams writes that, “African elephants, convert woodland to shrubland, increasing the vegetation available for other herbivores, and clearing the way for large predators, like lions, to more effectively hunt.”  Again, these problems might not seem like they hit close to home, but consider that this example is just the tip of the iceberg.

The bottom line is that losing even just one species can have a domino effect, and we probably haven’t even thought about all of the potential repercussions, or just how far they will spread.

How can you help?
A great way you can help would be to support organizations like the World Wildlife Fund or the International Fund for Animal Welfare. With your support, these organizations can help combat the factors that will lead to a world without large herbivores.