Freak Accident: Can a Cat Live Without a Tongue? 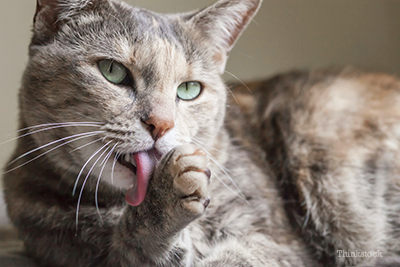 It sounded like a cruel prank. “My dog ripped my cat’s tongue off,” said the lady on the phone.

The receptionist at the emergency clinic calmly responded: “Please bring your cat in, our doctor will assess the situation.”

Once the client and the cat arrived at the clinic, it was a fairly easy diagnosis. On the exam table was Harry, a very chubby cat without a tongue, who appeared remarkably calm. And in a sandwich bag was, Harry’s tongue.

Harry’s guardians had always been animal lovers and had recently adopted a rescue dog, which they named Lucky. Everything seemed to be going well between Lucky and the other dogs and cats in the household, until that fateful day when nobody really knows what happened.

In addition to the tongue issue, Harry had a 1 inch cut (called a laceration) on the left lower lip. So a theory emerged: there was a fight between Harry the cat and Lucky the dog. Harry hissed, and as Lucky bit his face, he ended up cutting the lip and getting ahold of the tongue. It was the ultimate freak accident.

What can we do about a missing tongue?
We had a long heart to heart conversation. I felt confident that Harry would eat by mouth pretty soon, but he would need assistance to do that, possibly for life. He would never be able to groom himself again, so he would need daily help to get brushed and cleaned up. His guardians were up for it. Once I was reassured that his guardians were truly committed, I felt that we had to give Harry a chance.

And so Harry had reconstructive surgery to fix what was left of his tongue. In case you are wondering, even though the tongue was preserved in a baggie, it is not possible to reattach it. There are too many tiny vessels and nerves involved. So all we could do is stich up the remainder of the tongue to the structures inside the mouth. In addition, the laceration on the lip was sutured.

The next steps
There was one very important precaution to take. Can you think of it? Here is a hint: how do you think Harry is going to eat? And remember, he was grossly overweight.

Overweight cats who suddenly stop eating are at risk for hepatic lipidosis. This is a condition where they end up with a "fatty liver" which can lead to death. It was impossible to predict how readily he would be willing to eat after surgery. The tongue must have been sensitive. So we needed to prevent Harry from getting hepatic lipidosis by giving him enough calories.

The solution? Placing a stomach tube (click here to learn more about stomach tube types). This silicone tube, placed through the skin and into the stomach, would allow Harry to receive enough calories and nutrients with a syringe. The plan was that once Harry would eat enough calories on his own, the tube would be removed. The tube was also an easy way to give Harry pain medications, rather than giving them by mouth.

Harry was eating about 25% of his calories by mouth within the first week, about 50% after 10 days and close to 100% by the end of the second week after surgery. To be safe, we left the stomach tube in place for one more week. We then removed it–in addition to his skin stitches. Thanks to his guardian's dedication and patience, Harry has a new lease on life!

In case you’re wondering, Lucky the rescue dog was adopted by another family. Meanwhile, Harry was such a trooper! He adapted to his new situation like nothing ever happened. His guardians did a fantastic job of feeding him through the stomach tube, then by mouth. Two months after surgery, he still needed to be spoon fed. Amazingly, he had learned to “lap” water on his own.

To many people, this freak accident would have meant the end of a pet’s life. To Harry and his guardians, this ordeal was a minor and temporary handicap. Harry quickly got over it, and went back to living a normal, happy cat life.