Two Dogs, One Unlucky Couch: This Coincidence is Tough to Believe

AJ Debiasse, a veterinary technician in Stroudsburg, PA, contributed to this article. 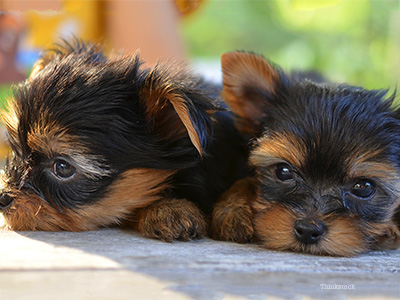 Naomi and Noah are two 6 month old terrier littermates who love their guardians. After they run around, through the house or in the yard, their favorite thing to do is to nap on a cozy lap.

One day, Naomi geared up for her cuddle time by jumping into her gaurdians lap. This particular evening she misjudged, slipped and fell. She cried out and was unable to place any weight on her left back leg. Without delay, her guardian rushed her to the local emergency clinic. A full physical exam was performed and radiographs were taken. Naomi had a “tibial crest” fracture. The tibial crest is the top, front part of the shin bone or tibia. Surgical repair was recommended.

Surgery to repair the tibia
The morning of surgery, Naomi had pre-op blood work to make sure she was healthy enough to undergo anesthesia. After she got a clean bill of health, an IV catheter was placed and she was started on IV fluid and pain medication. General anesthesia was administered and Naomi was attached to several monitoring devices to make sure her vitals were stable throughout anesthesia.

Two pins were placed to reattach the small piece of bone to the main portion of the shin bone. Occasionally, a wire may also be used to secure the bone. Naomi spent the night at the hospital on IV fluids, antibiotics and pain medications. She was safely returned home the next day.

Pain medications and antibiotics were sent home, along with an E-collar (plastic cone) to keep her away from the incision. Naomi required 6 weeks of strict rest and leash walks and only to go outside to eliminate. Inside the house, she was confined to a play pen with no stairs, slippery floors or anything to jump onto. The guardians had to perform simple physical therapy exercises on the knee. After 6 weeks, Naomi returned for follow-up X-rays to confirm that the bone was healed and it was time to increase her activity.

The owner had been walking them separately for 6 weeks: first Naomi, then Noah. One day, just around the end of Naomi’s confinement period, Noah became very excited to see his sister walking outside through the window. He started to run around the house. He went to jump up on the same chair that Naomi had fallen off of. As the guardian came back in to walk Noah, he noticed the dog limping and crying in pain.

Just to be safe, Noah was wisely taken back to the same emergency clinic. A physical exam was performed and radiographs were taken. Unbelievably, Noah had the same fracture in the same bone of the same leg!

What are the chances? Same litter, same chair, same leg, same bone, same fracture, same surgery! And so it was poor Noah's turn to require surgery.

This is why pet insurance is so great
Naomi and Noah’s guardian was clearly my unluckiest client last year, but he was a good sport about the whole situation. It was nobody’s fault. Fortunately, he was able to provide surgery for both dogs, and we reached a happy ending for all.

This is a good reminder that freak accidents can happen at any time. If you feel that you are not prepared financially for an unpredictable health issue with your pet (trauma, cancer, a sickness), you might want to consider getting pet insurance. Click here to learn more about pet insurance and its benefits.

What the story doesn’t tell, is what the owner did with the fateful chair…