New Vaccine Site for Cats Could Save Lives

Dr. Ernie Ward is the author of Chow Hounds: Why Our Dogs Are Getting Fatter – A Vet’s Plan to Save Their Lives (2010 HCI) and Founder of the Association for Pet Obesity Prevention. Visit Dr. Ernie at www.DrErnieWard.com or on Facebook. 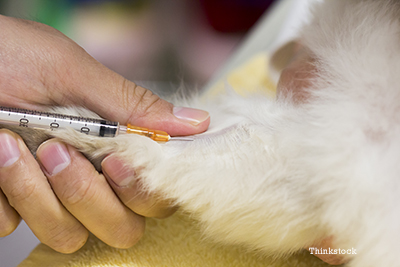 Perhaps nothing has saved more lives than vaccines. Today in the US we rarely encounter once-common maladies such as smallpox, polio and measles that took innumerable lives less than a hundred years ago. Pet parents have little reason to fear devastating diseases such as canine distemper, feline leukemia, and rabies that stole countless companions only fifty years ago. But that doesn’t mean modern vaccines don’t carry some risk, especially for cats.

It’s estimated that about 1 to 10 out of every 10,000 cats vaccinated will develop cancer at the injection site. While that’s a truly tiny number, it still adds up. And all those statistics don’t mean a thing if your cat happens to be the “one.” A new vaccine site proposal could lessen the risk of losing your cat to vaccine-associated cancer.

The reason we chose these locations were simple: easy access, plenty of skin, cats appeared to tolerate it reasonably well, and we could easily determine which vaccine caused any problems. The vaccines were tested in these sites and we found they worked. If cancer occurred, we could amputate the affected limb in most cases, thereby saving or prolonging life. Imperfect but much better than sticking everything in the “scruff.” Until now.

A new study evaluated giving cat vaccines in the tail. If cancer did develop, the tail could be easily amputated and have minimal impact on quality of life. Everyone agreed that, in theory, the tail would be the preferred place to vaccinate cats. The question was would cats allow a vaccination in their tail? Even more important, would the vaccines work if given in the tail?

University of Florida veterinarians studied 60 cats. The first question they answered was if they could actually stick a needle in a cat’s tail region without the vet losing their life or at least a quart of blood. The vets found the cats tolerated tail injections as well as rear hind limb jabs. I’m not going to say cats love or even like injections, but these researchers found it acceptable.

The second part of the study was to measure if vaccines work when given in the tail. While this was a small study, 100% developed antibodies against feline panleukopenia virus (FPV) and all but one cat had acceptable rabies titers. Basically these results were consistent with what we see when administering vaccines in the distal limbs. So far, so good. What’s next?

I think this study should open the door for further investigation and research into alternative vaccination sites. It has given me reason to explore and discuss these findings with my feline pet parents. Many veterinarians, including myself, are already vaccinating as far down the leg as possible; vaccinating in the tail may be a relatively easy transition for us. My advice is talk with your veterinarian about not only what vaccines your cat needs and when they should receive them, but also where they should be vaccinated.

Vaccines save lives. My job is to avoid as many complications as possible while saving them. This looks like another step along that journey.