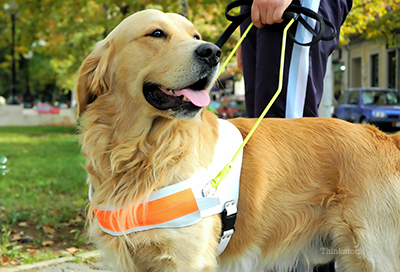 An eight-year-old Golden Retriever named Figo (pronounced “FEE-go”) is my new hero. Figo is a devoted service dog and he recently demonstrated his devotion by putting his life on the line for his human companion, Audrey Stone, who is legally blind.

On June 8th Audrey and Figo went out for their daily walk in Brewster, New York. While crossing a street, they were approached by a school bus. The bus driver failed to see the twosome, but Figo clearly saw the bus moving toward them. According to CBS New York, witnesses at the scene describe Figo leaping to action by moving from his companion’s right side to her left, literally putting himself between Audrey and the bus. In spite of his efforts, Audrey and Figo were both seriously injured.

According to CBS and Peter Kramer of lohud.com, Audrey Stone is in stable condition at Danbury Hospital, recovering from a fractured elbow, ankle, three broken ribs and a cut to her head. Fifteen miles away from where Audrey is recovering, Figo is also in stable condition at Middlebranch Veterinary, located in Carmel New York. Figo’s right front leg went under the bus, resulting in a mild break in the bone as well as severe trauma to the skin and deeper tissues.

Figo’s surgery
Surgery was performed on Figo’s leg, and he is receiving antibiotics and pain medication. Multiple bandage changes will be required throughout his recovery, reports Kramer. Dr. Angela O’Donnell, the attending veterinarian, says that Figo is on the mend. “He won’t have to wear the cone of shame. He’s a good boy and he’s leaving his bandage alone. That points to the strides he’s making. If it was bothering him more, he probably would be chewing at it.” It was an anonymous benefactor that offered to pay for Figo’s veterinary care.

In a lohund.com video interview, Audrey Stone talks about Figo, her third service dog. “We hit it off immediately. He protects me, he loves me, and vice versa. We just have a strong connection.” Stone said that she doesn’t remember much about the accident, but she clearly recalls the image of a wounded Figo crawling to be by her side. Witnesses say the same thing, according to CBS. Following the trauma, Figo remained intent on staying by his Audrey’s side. He didn’t stop struggling until she was taken away by ambulance. Audrey was quoted as saying, “He needs the Purple Heart from the president.” I couldn’t agree with her more!

Here’s hoping for smooth and speedy recoveries for Audrey and Figo, and may they be reunited very soon.