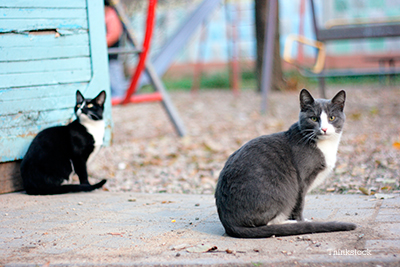 Trap-Neuter-Release (TNR) has long been regarded as an effective means of controlling feral cat populations. I’ve been an active supporter and spayed and neutered hundreds of feral cats over the past twenty years. New research from Tufts University advocates Trap-Vasectomy-Hysterectomy-Release (TVHR) may be a better solution for wild cat populations, at least on a computer.

The Tufts University veterinarians began by questioning the efficacy of current TNR programs for dealing with feral cat colonies. In their August 15, 2013 Journal of the American Veterinary Medical Association publication, the authors point out that data supporting TNR as an effective means of feral cat population reduction in large areas is lacking. Feral cat population control is a big deal because many experts estimate the number of feral cats in the US is now greater than family house cats. Many people are concerned that this enormous population of free-roaming cats can damage indigenous wildlife, spread disease, and may pose a risk to humans. To better understand the problem, the Tufts veterinarians worked with engineers to create computer models to predict how various population control measures would fare dealing with large feral cat colonies.

One of the first interesting conclusions the computer models predicted was how ineffective traditional TNR was at reducing feral cat numbers. The researchers concluded that unless at least 57% of the cats were captured and neutered by TNR or removed by lethal control, there was no effect on population size. This is somewhat discouraging because I can tell you first hand how challenging it is to ensure almost 60% of a given colony are spayed or neutered at any time. Further, if the goal was to have zero population growth within a colony, thereby allowing the feral cats to die out naturally, scientists calculate it would require over 82% of the colony be spayed or neutered or removed by lethal control. It was about this time the researchers started thinking outside the box.

Traditional TNR involves a surgery to remove the testicles in males (neuter) and the ovaries and uterus in females (spay). We’ve long known that after the testicles are removed and male sex hormones such as testosterone are eliminated, male cats no longer fight for territories and social status or protect their females. In other words, once a feral male cat is neutered, he’s more than willing to allow new un-neutered males to enter his territory and impregnate any intact females. Better yet, if a vasectomized male copulates with a sexually intact female, the female cat undergoes a 45-day pseudopregnancy during which she has little chance of reproducing. What if we could eliminate the ability to procreate while maintaining male sex drive? Sounds an awful lot like a vasectomy to me.

Females that have undergone hysterectomy continue to attract males. Even better, these altered females resume competition with sexually intact males for courting and breeding time. So what did the computer models say worked better? TNR or TVHR?

TVHR won by a landslide. The Tufts computer simulations consistently concluded that as few as 35% of cats annually captured and TVHR performed was effective at reducing colony populations. At 57%, TVHR eliminated the colony within 4,000 days. This is potentially a very big deal.

The purpose of this Tufts study was to invite investigation into new ways to control the feral cat population. The reality is we’re losing this war and need to innovate if we’re going to help. The surgical techniques for TVHR need significant refinement before I see this as a viable large-scale solution. We also need to ask serious questions about feral cat behaviors such as howling, territorial aggression, and urine marking that persists after TVHR. This research is very interesting and you can bet I’ll continue to watch it closely. For now, I’ll be perfecting my feline miniature vasectomy skills.