What Kind of Music Do Cats Like? New Study Offers Insights 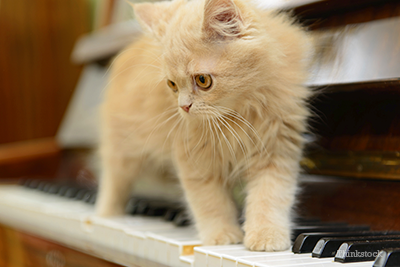 House cats often appear aloof and indifferent toward their human companions. It’s pretty hard to get a cat to show emotion or get excited about much. This seeming apathy, however, may be genetically programmed and cats may have more definite likes and dislikes than we thought.

A recent Internet report asked if cats might, in fact, have definite musical tastes. Now they probably don’t like or even approve of Cat Stevens or Cat Cora, but early studies indicate cats may have definite musical preferences. Remember, not all of us humans like the same musical styles and certainly not all cats will respond favorably to a recent study published in the journal, Applied Animal Behavior Sciences. It seems that cats and other animals prefer “species appropriate music” and no that doesn’t include Cat Scratch Fever.

What kind of music do cats like?
Robbie Gonzalez of i09.com reports that researchers found, in order for music to catch and perhaps hold the attention of an animal, “It must be in the frequency range and with similar tempos to those used in natural communication by each species.” It is possible that feline-appropriate music might mimic the rhythmic and tonal qualities of a purr or a kitten suckling at its mother's teat. Almost like a lullaby!

I know my own cat has no interest in my sort of music and in fact sometimes seems distressed when I listen to music. Feline appropriate music, the tune, the researchers write, "has a pulse related to purring of 1380 beats per minute with melodic sliding frequencies covering 44% of the sample" (sliding frequencies are found in a variety of cat vocalizations, but aren't commonly found in human speech)1.

"Cats showed a significant preference for and interest in species-appropriate music compared with human music1." Expressions of approval included purring and orienting the head toward, moving toward, rubbing against or sniffing the speaker from which the music was emanating. "The results suggest novel and more appropriate ways for using music as auditory enrichment for nonhuman animals," the researchers concluded1.

I decided to test the theory with my own culturally deprived cat, Ritz. Ritz showed no response to a number of musical offerings from my collection. In fact he got up and walked away. But when I played examples of “feline appropriate music” he rubbed on the speaker with his face and pressed his face against my computer.

Scientists have developed what they say is the first species-specific music for domestic cats by replicating sounds like purrs and meows to create original music2. Listen to samples of the music they are creating. At the very least these studies give you a chance to experiment with your cats at home.