The Bichon Frise finds its beginnings in the Mediterranean over 2000 years ago. He is a descendent of the Water Spaniel.  He was used to barter for goods and his enduring nature led to a high demand, which in turn led to a rapid expansion of the breed.

The popularity of the Bichon Frise lasted all the way into the renaissance age. It wasn’t uncommon to see this funny little dog at the royal courts in France. They were a favorite of nobility and appeared in many paintings during that time.

In the late 19th century the Bichon Frise lost its noble appeal and became a commoner’s dog. He would follow around merchants on the street and do tricks to amuse the public. The Bichon Frise numbers dwindled.

In 1934 France revitalized the breed, and renamed it. Until then the Bichon Frise had been known by two names: the “Tenerfie,” and the “Bichon.”

The Bichon Frise entered the United States for the first time in 1955 and was recognized by the American Kennel Club in 1973. 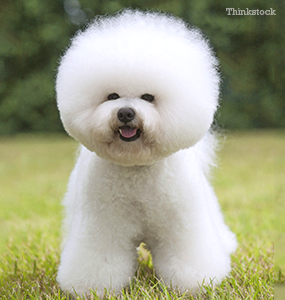 The Bichon Frise would not have survived this long if not for his friendly, playful and endearing temperament. He’s full of energy and curiosity. He’s alert and makes for an excellent watchdog.  It’s in his nature to alert you to every change in your environment, and it will require consistent and firm training to keep the Bichon Frise from becoming a problem barker.

The Bichon Frise is good with children because he doesn’t get upset easily and has enough energy to keep up with them. At times he might seem manic in the house and bounce of the walls or furniture. Plenty of play time and a short walk can control such outbursts.

The Bichon Frise is notoriously difficult to housetrain but as with any dog patience and proper research will win the day.

The Bichon Frise should be groomed every four to eight weeks.

The Bichon Frise is a generally healthy breed but you should be on the lookout for a few conditions: