Do Cats Fear The Water? 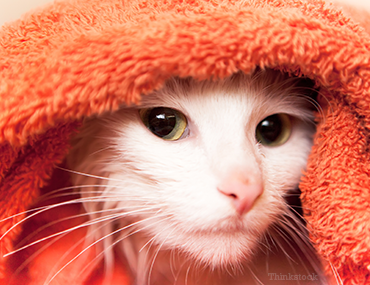 Have you ever seen a cat on the beach or swimming in a pool? Most people, myself included, would probably say no. So have you ever wondered if there is any truth to the commonly held belief that cats hate water?

Wild cats and water
A good way to start the conversation is by looking at our domestic cats’ wild relatives. After all, many of our pets’ behaviors are remnants of their wild ancestors’ instincts. Regarding water, wild cats fall into two camps—generally depending on where they live.

Domestic cats and water
Domestic cats, though related to these wild cats, are not directly descended from them. Domestic cats have developed over many centuries from a single wild ancestor that still exists in the wild today, the Near Eastern wildcat of the Middle East.  As water is scarce in the Middle East, these cats were not exposed to it in any great degree, and their decedents, likewise, do not generally appreciate water except for drinking.

Domestic cats that don’t like water
Today, most domestic cats would rather not bathe in, swim in or otherwise interact with water. Fortunately, they do not need to. While other species of animals (such as humans) clean themselves with water, it is not necessary for cats to do so. Cats are inherently clean animals; they use their tongues, which have minute hooked shaped papillae, to assist in grooming out knots and keeping the coat clean, sweet smelling and in tip-top shape.  In addition, many breeds have coats that trap water, so getting wet makes it hard for them to stay warm in cool weather.

Domestic cats that do like water
Of course, there are exceptions to the general rule:

So what is the truth about cats and water?
Cats are very individualistic. While most domestic cats naturally show indifference or even an aversion to water, there are exceptions and you will find individuals that actually like water. Conversely, there are individuals from breeds known to have an affinity to water, that go against the norm and dislike it.

So does your cat love or loathe water? Tell us below!

Also check out the surfing cat from Peru.