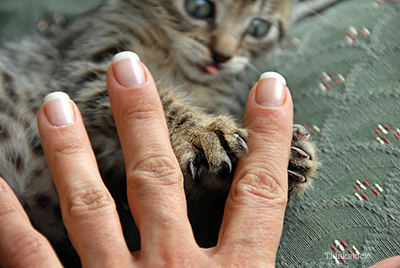 How is Cat Scratch Disease transmitted?
According to the CDC, 41% of healthy cats harbor Bartonella henselae. Bartonella henselae is also more common in young cats and strays. Cats typically become infected when bitten by an infected flea. Though less common, cats can also become infected when exposed to infected blood, such as from a blood transfusion or during a cat fight. People get Cat Scratch Disease when scratched or bitten by an infected cat, typically a kitten.

Prevention of Cat Scratch Disease
As with all diseases, prevention is the best treatment. The best way to prevent Cat Scratch Disease is to avoid getting scratched or bitten, which means no rough play with rambunctious kittens. In addition, keep your cats indoors and on year-round flea control to decrease exposure to infected fleas carrying Bartonella henselae. Enforce hand washing with soap after playing with cats, and avoid contact with stray cats. Immunocompromised people should take additional precautions, and according to the CDC, they should avoid owning kittens.