The debate over the origins of the Dogue de Bordeaux has never been settled. Some speculate this breed is descendent from the Bulldog or Bullmastiff while others believe they predate both. It’s possible Dogues are the offspring of Tibetan Mastiffs, the Roman Molossus, or the ancient dogs of Aquitaine. Regardless, the Dogue de Bordeaux has been in France for at least 600 years. Their first show appearance was in Paris: 1963. At that point they were given a name which represented the region where they had first been sighted.

Dogues de Bordeaux has been used as a guardian, hunter and fighter. They were especially good at baiting bulls, bears and jaguars. After the French revolution Many Dogues lost their lives because of an association made between them and the aristocracy. Raymond Triquet can be credited with saving the breed during the 1960s. Had he not intervened with a breeding program the Dogues certainly would have met their end.

The Dogue de Bordeaux was first introduced into America in 1959, but didn’t find any level of popularity until 1989 when he was featured in the movie “Turner and Hooch.” He was recognized by the American Kennel Club in 2008. 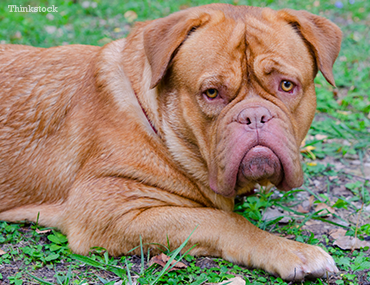 The Dogue de Bordeaux comes in a wide variety of personalities. Generally he will be sweet and well mannered, but he also has a stubborn and aloof side. In either case he will be loyal to a fault and a funny loveable addition to any family.

He makes a spectacular guard dog, and will always stand between you and strangers. To get the best out of your Dogue de Bordeaux it’s important that you socialize him early, especially around other dogs. A poorly socialized Dogue will lash out and attack other canines. Training a Dogue requires you to have a relaxed and steady pace, it’s also important that you be the pack leader or the Dogue will walk all over you.

A short walk will be enough to satisfy the Dogue de Bordeaux, he doesn’t require rigorous hikes, although he does have a history of working hard. His short coat also makes for relatively low maintenance. You should be prepared for your Dogue de Bordeaux to drool.

The large build and short muzzle of the Dogue de Bordeaux can come with certain health concerns:

As always, choosing the right breeder is the most important step you can take when getting a new dog.