On November 17th, a tornado crashed through Washington, IL destroying Jacob Montgomery’s third floor apartment, reported the The Associated Press on nypost.com. He found himself forcefully separated from his dog Dexter, a 6 month old pit bull. Montgomery, who is a military police officer with the Illinois Army National Guard has trained for emergency situations, but now he found himself the victim of a disaster for the first time. 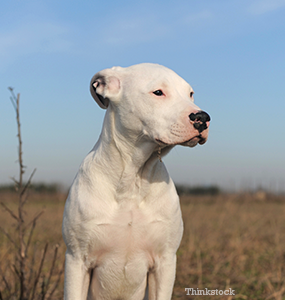 After searching through the debris several times, 9 days passed with no sign of Dexter. A sigh of relief fell over Montgomery when he was sent a message through Facebook from a group called Rescuing Animals in Need:  “I’ve got your dog right here.” Dexter was partially buried in the wreckage where the apartment building used to stand but seemed in good shape, “As soon as Dexter saw me, his tail started going,” recalled Montgomery.

According to nypost.com, with the motivation of his owner and a few sniffs of some hot dogs Dexter wiggled to freedom and the two were finally reunited. The veterinarian said, Dexter was malnourished with a few cuts and scrapes but had no real injuries and was going to be fine. Montgomery expressed, “all I had in my apartment is gone, but my dog was all I really had to worry about.”

This story beautifully represents how important organizations such as Rescuing Animals in Need really are. You might be able to help out pets around your neighborhood or around the world by supporting organizations like this. Or you can fulfill that holiday spirit of giving by volunteering at your local shelter this holiday season.