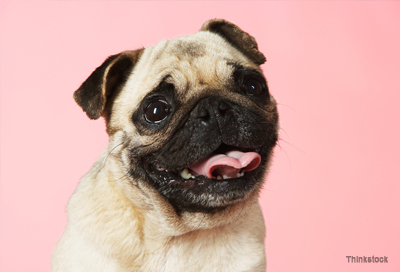 Ralph Matson says his service dog, Beef, changed his life, and perhaps even saved his life.  It’s certain that Matson saved Beef too. A Pug, Beef was a three-year-old rescue dog when he was paired with Matson, and trained to respond to Matson’s post traumatic disorder syndrome (PTSD).

(Matson interview) Matson pauses, and attempts – without success to hold back his emotions. “I can’t imagine what my life would be like if it wasn’t for this dog.” He’s petting Beef, who sits in his lap as he talks.

Can service dogs help prevent suicide?
“We have the technology to rebuild body parts of injured veterans, artificial hands and legs; but no technology to deal with PTSD,” says Tracy Libby, author of Reporting for Duty: True Stories of Wounded Veterans and Their Service Dogs (i-5 Publishing, Irvine).

According to the United States Veterans Administration, 22 veterans commit suicide daily, that’s one every 65 minutes (a stat that far exceeds the suicide percentage in the general population). This data doesn’t even include failed suicide attempts of veterans, and at least 40 percent of these suicides have diagnosed post-traumatic stress disorder, according to Libby.

“The hardest part is coming forward to admit there’s a problem, and to seek help,” says Matson. “The very nature of what PTSD does is to shut people down, and keep them secluded.”

“It’s hard to make an argument that the service dogs don’t save lives,” says Libby. PTSD veterans with a service dog have suicide rates about the same as the general public.

Are service dogs as effective as traditional treatments?
Libby explains that traditional treatment for PTSD includes various medications, “throwing drugs at this problem.” Libby says she has little doubt that many meds are necessary. However, paired with a service dog, many veterans require fewer meds (sometimes even no medication), and perhaps lower dosages of the drugs they still use. Also consider that many drugs have side effects, and then more drugs are required to control those side effects. Service dogs have no side effects.

Formal training of service dogs for vets with PTSD is expensive; however, the investment arguably pays off with U.S. taxpayers supporting fewer unemployed vets and fewer veterans requiring as much medication.

New support of service dogs for veterans
One model to provide needed service dogs is a Chicago, IL-based program called Pets for Vets. Through this program, shelter and rescue dogs (sometimes destined for euthanasia) are paired with veterans.

Chicago City Clerk Susana Mendoza is an enthusiastic supporter of Pets for Vets. “The service dogs save lives of veterans, or at least keep some out of the emergency room. And dog lives are saved. All this saves taxpayer dollars too. This is the kind of thing government should be supporting, it’s common sense. Not supporting service dogs for vets is cutting your nose to spite your face.”

One shortcoming of the program is that shelters and rescues have few financial resources to provide for the training of service dogs. However, in the Chicago area, the Fifth Third Bank stepped up to offer financial support.

Andrew Hayes, VP of Regional Marketing & Public Relations Director says, “After hearing veterans like Ralph, how can you not get involved? It’s a way to easily make a difference for both veterans, and animals who need a second chance. I believe these animals are just as grateful as the veterans.”

Today, Matson volunteers to help other PTSD veterans get a service dog with a non-profit called War Dogs Making It Home.

Matson continues petting Beef. “I can now go to the shopping mall with my wife,” he says. “PTSD will never go away – but I can better manage now. And I feel productive again.”