Left to Die, But Saved: Senior Dog Recovered After Being Buried Alive 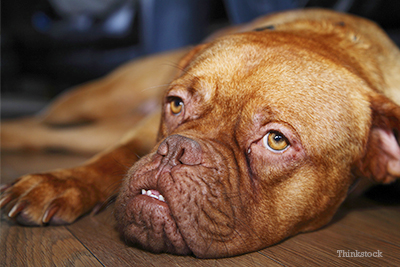 A wave of anger and disgust is sweeping social media after a man found a dog buried alive in Carrieres-sur-Seine, just west of Paris, this month. According to his Facebook page, Pedro Dinis was taking his dog for a walk when saw the dog- buried up to her head. He quickly began helping the poor girl free from her intended grave and took to Facebook to share the story.

Buried and left to die
The was buried up to her head with dirt and gravel, reports The Dodo. On his Facebook page, Pedro wrote, “Only her head was visible and it was difficult to see given the amount of earth covering her.” In trying to free the dog, Pedro discovered a rope attached to a sack of gravel to tie her down, preventing her from freeing herself on her own.

The rescue
Pedro jumped into action, trying to free the dog who Le Parisien reports is a 10-year-old Dogue de Bordeaux who suffers from osteoarthritis. (This breed is known for being especially well-mannered and loyal.)

Pedro’s dog Goddess even started helping. Pedro heroically freed the helpless animal and offered her water, as she seemed dehydrated and very much in shock. She was then rushed to a nearby veterinary clinic where she is reported doing well and will recover.

Tracking down who did this
While many stories like this end without a suspect, a lucky discovery was made. A tattoo located on the dog lead the police to her alleged owner who claimed the dog had escaped. Given the dog’s state, the police have deemed the man’s alibi not credible and he is currently in custody.

If you'd like you can view the photos here. Warning: they are very graphic and unsettling.