Can Snuggling with Shelter Cats Improve Their Health?

From personal experience, I can say that anyone who’s worked or volunteered in a shelter with cats knows about the scourge of feline respiratory disease. According to the ASPCA, rates of respiratory disease are high in shelters and catteries due to increased stress levels. Cats in shelters are also in closer proximity with other cats, and respiratory disease is considered to be the number one health concern of shelter cats, according to the Koret Shelter Medicine Program. Being kept in close quarters with a lowered immune level means cats can get sick, recuperate, and then fall ill all over again in a vicious cycle. As a result, there is much discussion among veterinarians and shelter staff on how to bring the rates of feline respiratory disease down. 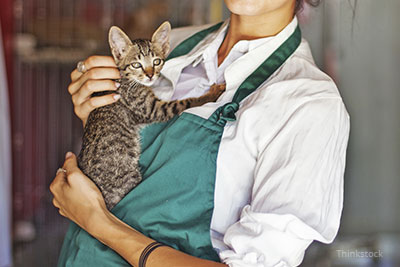 Shelter cat study groups
An interesting new study published this month in Preventive Veterinary Medicine provides strong evidence that a particular form of environmental enrichment may significantly decrease the respiratory illness rate among shelter cats. The study, led by Dr. Nadine Gourow and Clive J.C. Phillips, looked at 96 cats that were placed into two different groups. All of the cats were evaluated behaviorally as “content” when they arrived in the shelter and did not appear unduly stressed or fearful.

The study period was a total of ten days.

Shelter cat study results
On the Science Direct website, where the study is available, it says that during the study time period, cats in the human-interaction group were more likely to be rated as “content” compared to the control group cats, and fewer of the human-interaction cats displayed anxious behavior compared to the control group cats. The cats in the control group also had a higher rate of respiratory illness. Using various biological measures to test the cats’ health and disposition, the researchers also found that the cats that interacted with people, secreted more antibodies to ward off disease.

Shelter cat study interpretation
The researchers in this study have concluded that cats are quite similar to us. In a personal interview, Associate Applied Animal Behaviorist and cat specialist Katenna Jones, ScM, ACAAB, CCBC, CDBC, CPDT-KA stated, “A stressed cat in a shelter is like a human texting while driving: the cat's body splits its focus between fighting off stress and fighting off disease. Like the texting driver, neither of the tasks gets done well. It's fairly common knowledge that stroking a companion animal is stress reducing for both the giver and receiver. Decreasing stress is like putting down the cell phone: the cat's body can focus on fighting disease (while the driver can focus on driving).”

Spending time in a shelter is very stressful for cats and this study could lead to more programs involving staff and volunteers that can help improve cats’ health through the simple, and pleasurable, activity of stroking and loving them. This attention, even for just short periods of time each day, can no doubt lead to more adoptions when cats display less anxious behaviors, less ill health and more interest in enjoying human companionship.

[Check out 5 ways to help your local shelter.]

Mychelle has more than 13 years of experience in the pet health industry and is a Certified Dog Behavior Consultant as well as a valued member of IDEXX’s Pet Health Network team since 2014.
Read more >