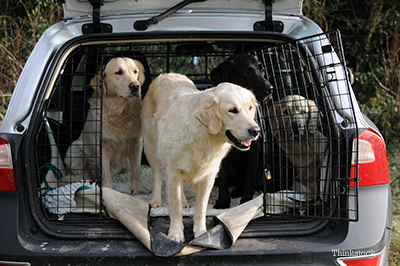 You’ve no doubt seen those dreadful car crash test videos, the ones that feature slow motion footage of what happens to human crash dummies during a head on collision. With Subaru of America as a sponsor, the Center for Pet Safety (CPS) has taken crash test studies to a whole new level. CPS has just released data on what they call their 2015 Carrier and Crate Crashworthiness Studies. This research was performed to evaluate the safety and effectiveness of various pet crates and carriers in the event of a car crash.

Who is the center for pet safety?
CPS is a non-profit research and advocacy organization dedicated to companion animal and consumer safety. CPS uses scientific methods to assess a variety of pet products and establish safety criteria and test protocols. One of the organization’s goals is to measure whether or not products designed for pet safety actually provide protection consistent with manufacturers’ claims. CPS is not affiliated with the pet product industry.

Harness research
Canine crashworthiness studies are not unprecedented. In 2013, CPS conducted a Harness Crashworthiness Study in conjunction with Subaru and MGA Research Corporation, an independent national highway traffic safety administration contracted testing laboratory. Pet harnesses are the equivalent of seatbelts for people. Major differences in popular harness restraints were discovered. The CPS report states that several of the harnesses failed catastrophically in a way that could cause serious injury to both the pet and passengers within the vehicle.

2015 research goals
During a car accident, not only is an unrestrained pet at risk for injury, the animal can become a projectile capable of striking and injuring a human passenger. The same holds true for a carrier or crate that doesn’t remain fully secured at its connection points within the vehicle during a crash.

Many crate and carrier manufacturers report that their products are “tested,” “crash tested,” “offer crash protection,” or are designed “for use in a vehicle.” To date, there are no standardized test protocols in the United States that substantiate these claims.

The CPS stated purposes of the 2015 crashworthiness studies include:

On Best In Show Daily, Michael McHale, Subaru’s director of corporate communications, described the purpose of his company’s research as follows:

“We at Subaru recognize the importance of keeping the entire family safe on the road, including our beloved pets. Alongside Center for Pet Safety, we are proud to help lead the charge in identifying the best crates and carriers for pet lovers everywhere, while, more importantly, making pet parents aware of the safety measures they can take and the dangers that can occur if they don’t. We recommend that owners choose the right sized crate for their dog, which is generally six inches longer than the body of the dog. We are also pleased that our crossover vehicles, which are award winners themselves for safety, accept most crate and carrier sizes.”

Study design
Subaru and CPS conducted their 2015 Crate and Carrier Crashworthiness Study using crash test dogs that were designed to approximate the weight and size of real dogs1. They were placed in the crates and carriers during rigorous crash testing. Within this study, crates were defined as rigid, non-plastic structures, and carriers were rigid plastic structures and soft collapsible structures.

Research results
Many of the crates and carriers failed to meet the successful outcome criteria described above. In some cases the dog was expelled from the crate or carrier. In other cases, the impact caused the crate or carrier to be released from its points of connection. There were two standout products:

Full reports of the carrier and crate testing, including photos of the outcomes can be found at the Center for Pet Safety website.

Regarding the study results, Lindsey Wolko, Founder and CEO of Center for Pet Safety stated, “In partnership with Subaru, the 2015 studies were truly eye-opening and will once again help bring pet safety awareness to millions of pet parents around the globe1.”

Kudos to CPS for performing these studies and hats off to Subaru of America for sponsoring them. By the way, darned good marketing, Subaru!