The Truth about the Origin of the Domestic House Cat 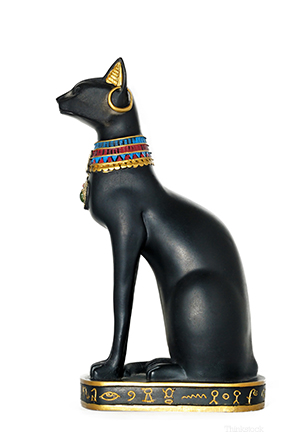 People and cats have a long and storied history, but where did our feline friends come from? Did they originate in ancient Egypt, where they were not only pampered, but also literally worshiped? Or are their origins even older?

Theories of domestic cat’s
For decades, many theories have existed to explain the origin of cats. Traditionally, most scholars believed that all domestic cats had a common ancestor in ancient Egypt, where cats were domesticated around 3,600 years ago. Other researchers believed that domestic cats had more than one ancestor, the result of domestication occurring at different times and places, each resulting in a distinct ancestral breed1. So what is the real answer? Fortunately, we now have newer archaeological evidence and results from genetic analysis to finally, and definitively, answer the question of where our beloved, furry felines come from.

Archaeological findings of early cats
The earliest archaeological evidence of cats and people living together comes from the Mediterranean island of Cyprus. According to research published in Scientific America, and found online at catoddities.com, in 2004, Jean-Denis Vigne — from the National Museum of Natural History in Paris — discovered a 9,500 year-old burial site on the island of Cyprus. Among the assorted objects found in the grave, such as a lump of iron oxide, stone tools, and seashells, was the skeleton of an 8 month-old cat. The cat was buried in its own grave, its body oriented westward toward the setting sun, the same direction as the human remains next to it1. Since cats are not native to Mediterranean islands, the cat in the burial was obviously brought to the island by human settlers from the Levantine coast (now Turkey, Syria, Lebanon, Israel). The inclusion of a cat in something as sacred as a burial suggests the close relationship developing between people and cats. So even though most of us think of Egypt as the origin of our domestic cats, the archaeological evidence points to an older origin from the Middle East.

Genetic testing in cats
As remarkable as the Cyprus finding was, researchers from the National Cancer Institute and the University of Oxford used their own genetic methods to trace back the origins of our domestic cats. In a study published in the July 2007 issue of the prestigious journal, Science, it was reported that the origin of the common household cat goes back to ancestors in the Middle East. By looking at the DNA of wildcats (Felis silvestris) from different regions, as well as domestic cats from the U.S., U.K., and Japan, the research team identified 5 matriarchal lines. Four of these correlated with known wildcat subspecies from different regions: Felis silvestris silvestris (Europe), F. s. bieti (China), F. s. ornata (central Asia), and F. s. cafra (southern Africa). Interestingly, the fifth lineage correlated not only with F. s. lybica from the Middle East, but also purebred and mixed-breed domestic cats from the U.S., U.K., and Japan. These findings indicate that Feline silvestris lybica is the common ancestor of all domestic cats. In fact, the DNA of F. s. lybica wildcats collected from remote deserts in Israel, Saudi Arabia, and the United Arab Emirates was almost identical to the DNA of domestic cats1.

So there you have it. Both the archaeological evidence and genetic methods confirm that all domestic cats originated from Feline silvestris lybica, the Near Eastern wildcat, and domestication first occurred in the Middle East. It is believed that when mice invaded human habitats to search for food, wildcats were attracted to human settlements to hunt mice. Early farmers recognized the importance of cats to control the rodent population. Selective pressure promoted tameness while maintaining rodent hunting skills. Ultimately, cats either followed their human companions, or were intentionally brought along, as humans migrated across, the globe1. This makes a lot of sense when you think about how domestic cats today, including “fancy” purebreds, maintain their hunting skills. In many ways, we didn’t domesticate cats, they domesticated us.