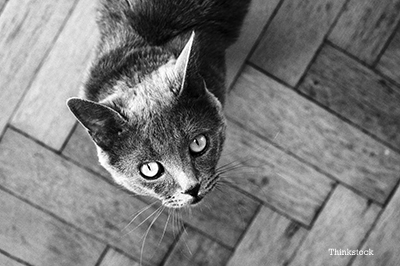 I have a bone to pick with hairballs. Not only are they messy and rather disgusting to clean up, near as I can tell, they have no redeeming qualities whatsoever. Why have I become so jaded about this relatively normal feline phenomenon? Here are a few of my personal and professional justifications.

Dinner party hairball
I recall a particularly embarrassing hairball incident that put quite the damper on a dinner party I was hosting. Envision my guests, all gathered round the table, enjoying their meal, when the conversation is suddenly interrupted by the sound of feline retching—a noise akin to a turbo-powered pump. The rhythmic retching lasts for five to ten seconds (feels like an eternity to me) allowing ample time for my dinner guests to hone in on the cat crouched at their feet. They are then treated to the sight of projectile vomiting, which produces a mat of hair in a pool of fluid. Those looking closely enough may have seen some ex-rodent parts embedded in the wad of fur.

While blushing and apologizing, I crawl under the table to clean up the mess, hoping there is no significant shoe splatter. I then shoo the puking rodent murderer out of the room. Whew, all done, but how do people who are not in my line of work continue to enjoy a meal after witnessing this? Strike one against hairballs.

Fred's hairball story
And then there was Fred…. Fred’s a wonderfully sweet Maine Coon cat with a long, plush Farrah-Fawcett hair coat. When I first met Fred, I was told that he was supposed to have already been dead.

As the story goes, several months prior, Fred’s appetite began to wane. The family veterinarian examined him and felt a large mass in the area of his stomach. Fred’s mama was told that her beloved kitty had cancer. She was advised to make Fred as comfortable as possible, and bring him back when it was time to let him go. Six months later, other than an ongoing poor appetite and weight loss, Fred was still acting pretty much like normal Fred. I was asked to render a second opinion.

This wonderful kitty was appallingly thin, and I could readily feel what the other veterinarian described—a large mass in the region of the stomach. I too was concerned about a tumor of some sort, but abdominal ultrasound revealed that this mass imposter was, in fact, a large foreign body living in Fred’s stomach.

Fred was treated in the operating room by unzipping his stomach and removing the largest hairball I’ve ever seen! (I’m kicking myself for not contacting Guinness World Records.) This hairball was the size of a small cantaloupe, and its shape and structure reminded me of one of those balls constructed from rubber bands.

Daily grooming to remove excess hair, increasing caloric intake, and administration of an over-the-counter, hairball remedy were prescribed. Fred made a complete recovery. His normal appetite and svelte physique were quickly restored.

While I was quite pleased with this outcome, I was pained by the fact that this hairball, posing as a mass, created six months of suffering for Fred and his devoted human companion. Six months is a long time in the life of a cat! Strike two against hairballs.

Hairballs, the ultimate scapegoat
Here’s the thing about hairballs that irritates me the most. Most cats regularly groom themselves. Therefore, it makes perfect sense that, at any given time, a cat’s stomach contains some hair. It also makes sense that, when a cat vomits for any reason (and there are dozens of potential reasons), a hairball may come along for the ride. Why is it then that the hairball is typically blamed for the vomiting?

I concede that, every once in awhile, hairballs do cause cats to vomit. However, this is the exception rather than the rule. When the hairball becomes the scapegoat for the vomiting, precious time and money are wasted on useless hairball remedies. What’s really needed is identification and treatment of the true cause of the vomiting. Strike three against hairballs.

Click here to learn more about vomiting and hairballs in cats.

Now it’s your turn. Tell me your hairiest hairball stories below!