Posts by:
IDEXX, dedicated to pets and their people
A Pet's Life 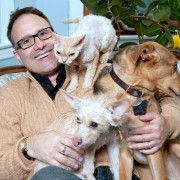 Steve Dale has always been fascinated with animals. As a child, he watched Joan Embery on the Tonight Show or Mutual of Omaha’s Wild Animal Kingdom. When he was approached by the Chicago Tribune in the mid-90s, Dale seized the opportunity with one caveat– he wanted to write a column about pets. Dale now writes a twice-weekly syndicated newspaper column for the Tribune Content Agency, hosts two nationally syndicated radio shows— Steve Dale’s Pet World and The Pet Minute— and contributes to numerous publications including Cat Fancy (now known as Catster).

Dale became increasingly interested in animal behavior after noticing that the majority of questions he was receiving from readers were behavior-related. Readers were contacting him with issues such as cats going outside the litter box or complaints about dogs barking during the day.

“Misunderstood animal behavior is a serious health concern,” said Dale. “The number one cause of death for cats and dogs is unacceptable behavior. When the animal-human bond begins to fracture, that’s when animals are given up,” Dale said.

Pets may end up abandoned outside, or the guardian may leave the cat or dog in a shelter where those perceived as “damaged goods”  face the danger of being euthanized. Too often, people believe that their pet is acting a certain way out of spite. In reality, the behavior may be related to an illness or another issue such as anxiety or fear.

“Cats who greet their owner and go scratch the couch are often misunderstood. The cat isn’t trying to be destructive,” Dale notes. “The cat is expressing excitement. He’s excited to see you.”

Instead of yelling at your cat for scratching the couch, Dale recommends finding alternative outlets such as putting a scratching post by your entrance. Whenever a cat or dog begins exhibiting a new behavior, such as going outside the litter box, Dale recommends seeking medical attention. The cat may have a medical issue such as arthritis, kidney disease or a urinary infection or may need a more enriched environment.

Combatting deadly diseases
Dale is also active in the Winn Feline Foundation, which provides funding for medical studies to improve cat health. The organization has funded more than $5 million in health research for cats at more than 30 partner institutions. Among the organization's many priorities is funding for heart disease. The Ricky Fund, founded in 2002 and named in honor of Dale’s beloved cat Ricky, was the first special fund created by Winn to investigate the most prevalent feline cardiac disease– hypertrophic cardiomyopathy (HCM). In cats with the disease, the heart muscle (myocardium) becomes abnormally thick (hypertrophied), making it harder for the heart to pump blood. As of February 2014, the Ricky Fund had awarded $120,000 toward HCM research.

“We know so much more about the disease than we used to,” Dale said.

Advocating for misunderstood breeds
Dale is also actively involved with fighting breed bans. Breed specific legislation is the blanket term for laws that either regulate or ban certain breeds in an effort to decrease dog attacks. These laws typically target the pit bull class of dogs as well as Rottweilers, German Shepherds and Doberman Pinschers. Dale began speaking out against such bans after a Chicago alderman called for a ban on Rottweilers after a child was bitten.

Studies have shown that breed specific legislation doesn’t work. Either the number of dog bites/attacks remains stagnant or increases after a breed ban. After studying human fatalities resulting from dog bites, the Centers for Disease Control (CDC) announced it would not support breed-specific legislation. The CDC’s concern with such bans is the inaccuracy of dog bite data and the difficulty in identifying dog breeds.

“Instead of trying to ban a specific type of dog, communities should focus on educational outreach, such as teaching children how to approach dogs in a safe and non-threatening manner,” Dale notes. “There’s no upside to these bans. We’re killing innocent dogs based on how they look. That doesn’t seem like America.”

Steve Dale, inspired by his own pets to learn more about animal behavior, is a tireless advocate for dogs and cats. His column reaches more pet owners than any other pet journalist in America and he is a regular speaker at veterinary and shelter conferences and fundraisers around the world.

Always humble, Dale said, “If I have helped pet owners, it’s not me people should thank. It’s my dog Chaser.”

IDEXX is devoted to bringing you and your veterinarian pet-health services and resources you can trust, like Pet Health Network.

Do you want to learn about IDEXX?